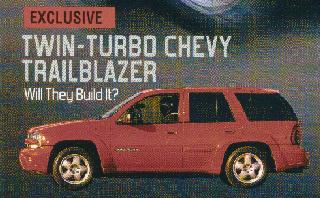 This article as WinWord include low and high res. pictures (760 kb)

Could it challenge the premium performance SUVs from BMW, Mercedes AMG, and Porsche?
by Jack Keebler • photography by David Freers

NOT SINCE THE LEGENDARY BUICK REGAL GNX, GMC SYCLONE, OR EVEN THE GMC TYPHOON has a similarly quick, turbocharged American product existed. Unfortunately, Chevrolet's TrailBlazerTwin- Turbo exists only as a concept vehicle, and we can't give you an on-sale date. Yet. What we can offer is a behind-the-wheel view with a fully instrumented track test of this 400-hp engineering study. And we can report that this agile TrailBlazer and its twin-blown Vortec 4200 engine are being evaluated for production. GM is a very different place nowadays from what it was even a year ago. Top management has been shaken up, and there are many new faces on deck, aiming to revitalize this sleepy giant. One such is
Ron Kociba, GM Powertrain's chief engineer on the 4.2L inline-six. At Mid-Size Truck, there's another batch of engineers and techs that have the same goals under vehicle- line executive Tom Wallace. Ask Fritz Indra, Powertrain's executive director of advanced engineering, why 400 horses are being extracted from a truck engine that makes 270 in production form, and he makes it sound like a logical extension of everyday engine-development work. "We just think 400 is a nice, reasonable number," he deadpans with his Austrian physics professor's accent. "And we were going after significantly more performance without changing the engine to a V-8.”

"Of course, if we needed more, there's more to be had," adds a smiling, but equally dry Kociba. "The point was to demonstrate the bullet-proof nature of this engine with fairly minor modifications."

We were surprised to learn how little is changed to create this Bullitt Mustang-performance-equaling six, with its twin Aerodyne turbos and air-to-water intercooler. For example, the block, crank, head, head gasket, cams, and valve sizes remain virtually untouched. The extra breathing hardware adds but 45 Ib to the engine's mass. The only critical mods were a switch to 8.5:1 pistons (from 10.1:1), the addition of piston-cooling oil squirters, shorter (by 2 mm) connecting rods, thicker piston pins, higher-flow oil pump and fuel injectors, and a freer-flowing exhaust system. As you'd expect, the 4L60-E four-speed transmission's internals required some beefing, and the transfer case was swapped for the ultra-tough
all-wheel-drive unit found in the 6.0L V-8-powered Cadillac Escalade.

Home office for the 4.2V270-hp Vortec six is the GMT360 platform (Chevrolet TrailBlazer, GMC Envoy, Olds Bravada). So it was logical to install this experimental version in one of those platform variants. The Chevy was chosen primarily because of its mechanical relationship with the hot Chevrolet (GMT368) SSR retro pickup and the long-wheelbase Chevrolet TrailBlazer XL (GMT370) with the third-row seat, both of which will debut soon. Besides, Chevy is the most performance oriented of these three brands.Higher-performance chassis, steering, and brake bits that will be found on the SSR also plug and play in the TrailBlazer, since they share a considerable amount of platform commonality. Mike LeDuc, one of GM's ride and handling development engineers, calls it his "library of parts." So bigger TrailBlazer XL brakes, stiffer springs, revalved shocks, a beefier rear axle, harder track bar and link bushings, and the faster XL steering rack were borrowed from LeDuc's go-fast lending library. Outside, the TrailBlazer (which has been lowered 40 mm) is little modified; keep in mind that this is largely an engineering, not design, project. The roof rack's gone, and functional louvers were  punched into the hood. Deep front bucket seats were installed. A boost gauge was popped into the hole left by the 4WD switch. Street-performance-biased 295/45ZR18 BFGoodrich Comp T/As are wrapped around 18x9.5-in. Speedline wheels. The look is buff, but quietly mature; no stripes or wings required. Enough parts talk—how's it work? Running approximately 8.5 Ib of boost, the twin-turbo 4.2 has given up none of its normal smoothness and quiet. Except for that unexpectedly quick climb made by the speedo needle, some turbo whoosh, and a bit of rear squat at launch, things inside during acceleration runs remain quite unremarkable. With the all-wheel-drive system to maximize grip, there's virtually none of the tire slip, yaw, or torque steer of typical high performance machines. This development vehicle's benign overall behavior strongly reminds us of the old turbo V-6 GMC Typhoon/Syclone. Indeed, a postrun look at our laptop revealed a steep acceleration curve and consistent mid-5-sec runs to 60 mph, with a best run of 5.35. That's compared to 8.2 for the standard TrailBlazer. Somewhat disappointing, but probably wise, is a software
bug intentionally left in the engine's computer that limits top speed to 110 mph. Otherwise, no letdowns. The handling/braking upgrades are nicely matched to the newfound power. For example, the beefier brakes and more aggressive rolling stock shortened the production TrailBlazer's 132-ft 60-0 stopping distance by 12 ft. These improvements also conspire to add an impressive 5 mph to the TrailBlazer's pass through the high-speed slalom and helped generate 0.86 g on the skidpad. These numbers put it squarely in BMW X5 territory. Handling at high speeds is largely neutral with initial push and tail-out available under full throttle. Overall, we'd say it's a smart chassis setup by LeDuc and company and a nice complement to the 400 horses underhood. Want one? Send your cards and letters to GM. Though many have wondered about the marketplace viability of highperformance sport/utilities, the demand appears to be there: Last year, the ML55 AMG was the best-selling among all AMG-ified Mercedes-Benzes. BMW is just now coming to market with its own hi-po, though not M-badged, X5. Let's not forget the upcoming Porsche Cayenne. So, why not a 400-hp TrailBlazer?